Westfield London has become not only the largest shopping mall in Europe, following its new £600m extension this Spring, but it also hosts more than 300 events a year. In addition to its vigorous retail activity, this includes concerts for as many as 4,000 people, with relays to their giant retail screens and multiplex cinema.

Building a network infrastructure to carry the myriad of communication signals and IP addresses over fibre across the 2.6 million feet of real estate (or 1km end-to-end) has been an organic process, which has been made easier since owners,

The Westfield Events team became aware of Optocore products in 2011, during the planning of sister operation Westfield Stratford City, but it was not until 2015 that it was decided the BroaMan system would be an ideal solution for video/ audio distribution. The systems designed and specified in 2015 have now been extended exponentially by current Senior Technical Manager, Ben Davies.

A split inventory of seven remote BroaMan racks can easily plug into facility panels in any public or back of house spaces, in order to link events together. The new outdoor event space, Westfield Square, was specified with a grid of 37 floor traps, each with fibre connections, enabling visitors to enjoy the Royal Wedding earlier this summer from deck chairs on London’s largest external full motion video screen above the Square. “The idea was always for an easy plug and play solution, to quickly link one area to another,” says Davies.

As the event infrastructure grew, and with IP connectivity becoming far more prevalent, HD Pro Audio’s Andy Huffer quickly made the case for Optocore and BroaMan, knowing it would cut down the cumbersome business of patching, and at the same time provide a less expensive option than copper, particularly with add-ons such as the construction of a video gallery. “They needed long distance audio feeds with a routing matrix because the point-to-point feeds were time consuming and fraught with problems. They were initially interested in Optocore but I informed them that BroaMan took the platform a lot further,” he said.

A BroaMan Route66 40 x 40 with hot-swappable, bi-directional SFPs, accompanied by external WDM frame, was proposed initially for Westfield London — and this was copied for Westfield Stratford City.

Both the Shepherds Bush and Stratford racks are identically configured, with a Route66 Optocore AutoRouter, Route66 40×40 Video Router and WDM Frame; 3 x Mux22-IVT/IVT 8 SDI-In/8 SDI Out and 3 x X6R-TP 8MI/8LO. Each system has the Route66 central matrix with a single Mux22 and X6R in the control room, with the remaining Mux22 and X6R combinations in remote racks.

The systems were installed in-house by the URW Events technical team, with specialist wiring completed by David Tyler of Tower Communications. The systems were commissioned onsite by BroaMan Technical Sales Manager, Maciek Janiszewski.

As for the second phase at Westfield London, which increases the indoor space by a third and adds the outdoor pedestrianised Westfield Square, HD Pro Audio have provided a further Route66 Optocore AutoRouter and Route66 40×40 Video Router with WDM Frame, as well as 5 x MUX22 8 SDI-In/8 SDI-Out, and 5 x X6R-TP 8MI/8LO.

Before committing to the system, URW had rigorously evaluated the platform against another proprietary media distribution network. “However, we felt that BroaMan was more of an installation product with greater immediate feedback on the front panels— and that the BroaMan product was generally a better solution for our needs,” reasoned Ben Davies. “Maciek (Janiszewski) would tell us, with total confidence, that if their system didn’t provide features we wanted, they would simply add them for us.’”

Maciek himself recalls the original concept discussion had taken place at the BVE Show in London many years earlier. “Over the years we met frequently at trade shows, and built a strong personal relationship with them. Finally we came up with the solution that met their exact requirements.” This was at Prolight+Sound two years ago.

As a result, URW became the first adopters of the Route66 40 x 40 layout. “Once we delivered the system it just worked smoothly straight ‘out of the box’. Even though it was quite a large project, with a completely new core hardware router, we were completely confident. It was reassuring that URW trusted us sufficiently to become the first to use the new product.”

The first Broaman / Optocore deployment could scarcely have been higher profile, when Lady Gaga took to the roof in December 2016, where a ‘snow globe’ had been specifically created to enable her to perform an intimate gig for a 100 prize-winners, with the action relayed to the multiplex cinema at the top of the building, which itself has already hosted several major film premieres.

Typically, says Davies, for major events, a BroaMan rack would be situated in the FOH control position, another at BOH, one in the press pen, and a final rack at an external location where broadcast trucks park up with line of sight to satellite uplinks. These are all linked together by the Route 66 matrix in the Control Room, routing the correct signals to the correct places.

The remote racks include all the D/A splitting necessary for local audio and video connections, along with Clear-Com LQ series outstations for communication links.

“As for the [Route66] AutoRouter, if a rack is unplugged, or unused for an event, this will automatically reconnect what is effectively a loop system, without internal re-patching.”

The BroaMan system offers the ability to tunnel through two additional IP streams by fibre. These connections are used for Gigabit connections from a network of Luminex Gigacore switches to stations within each mobile rack. Port aggregation on the Luminex switches allows a maximum 2 Gb bandwidth to each remote switch.

A redundant stack of Cisco 550SG fibre switches in each control room provides the backbone for the Luminex network.

In terms of signal flow, for the Lady Gaga show, video/audio signals from the event on the roof were sent (by single-mode fibre) from the remote rack Mux 22 unit to the control room Route 66 downstairs; the signals were then routed to the video gallery (where it was vision mixed) and then output to broadcast trucks on the other end of the complex, and the cinema screens upstairs.

“Innovation is extremely important to us at Unibail-Rodamco-Westfield. It is fantastic to have developed and deployed such systems with our consultants and manufacturers, which helps us deliver large scale events, often to tight timescales,” says Ben Davies in conclusion. “We are very proud to have the opportunity to work with so many A-list stadium acts, demonstrating the value of the ‘Westfield’ brand.

“Optocore and their BroaMan system is now central to the behind-the-scenes technical delivery of these events. With so many SDI signals, audio signals and IP streams I don’t think we realised just how great the benefits of BroaMan would be. The way the Optocore team has worked with us on these systems makes us feel more like a member of an extended family, than customers.”

For further information about Optocore visit www.optocore.com and for BroaMan visit www.broaman.com

BroaMan (Broadcast Manufactur GmbH) is the company behind high quality products made in Germany, that are aimed at broadcasters as well as production companies, sport facilities, professional AV integrators and many more applications. The company offers customised solutions as well as standard devices for every application that requires SD/HD/3G video transport or routing – whether a big and complex system for broadcast studio or OB Van, or a simple point to point for a small church, conference hall, etc. With DiViNe (Digital Video Network) all open standards can be integrated — digital video, audio and data — on the same fibre infrastructure. One of the main differentiators from other companies providing video over fibre solutions is the approach. BroaMan’s customers can order a video system on demand, which is unique, and requires a different level of complexity and features, and yet it still has the best price ratio on the market. These BroaMan systems are tailored to match the customer’s exact needs. Besides tailor made systems, BroaMan offers Standard Devices, which includes the Mux22 BNC Intercom. For the complete list of Standard Devices see: http://www.broadcastmanufactur.com/index.php/news-events/news/198-faster-delivery-time. BroaMan has over 25 years of experience in creating fiber infrastructures and has provided many products for use in the portfolios of well establish companies such as ClearCom, DiGiCo, RTS and many more.

Based in Munich, Germany, OPTOCORE is the world market leading provider of high bandwidth, low latency, resilient, scalable and flexible fibre optic based networks for the transmission of audio, video and data. For 20 years, Optocore has been continuously innovating and setting new standards with regards to digital network technology. OPTOCORE builds and develops synchronous optical fibre and CAT5 based network solutions for broadcast professionals — for fixed installations and live event applications. Utilising leading-edge technology and high-quality components Optocore guarantees durability and therefore long-term market and customer satisfaction. Due to the open system architecture, Optocore’s platform offers other manufacturers the option to transfer conventional standard audio, video and data formats used in the pro audio industry, via an Optocore network. Technical expertise, QoS and an extensive support structure are guaranteed to all customers, together with the highest level of quality. 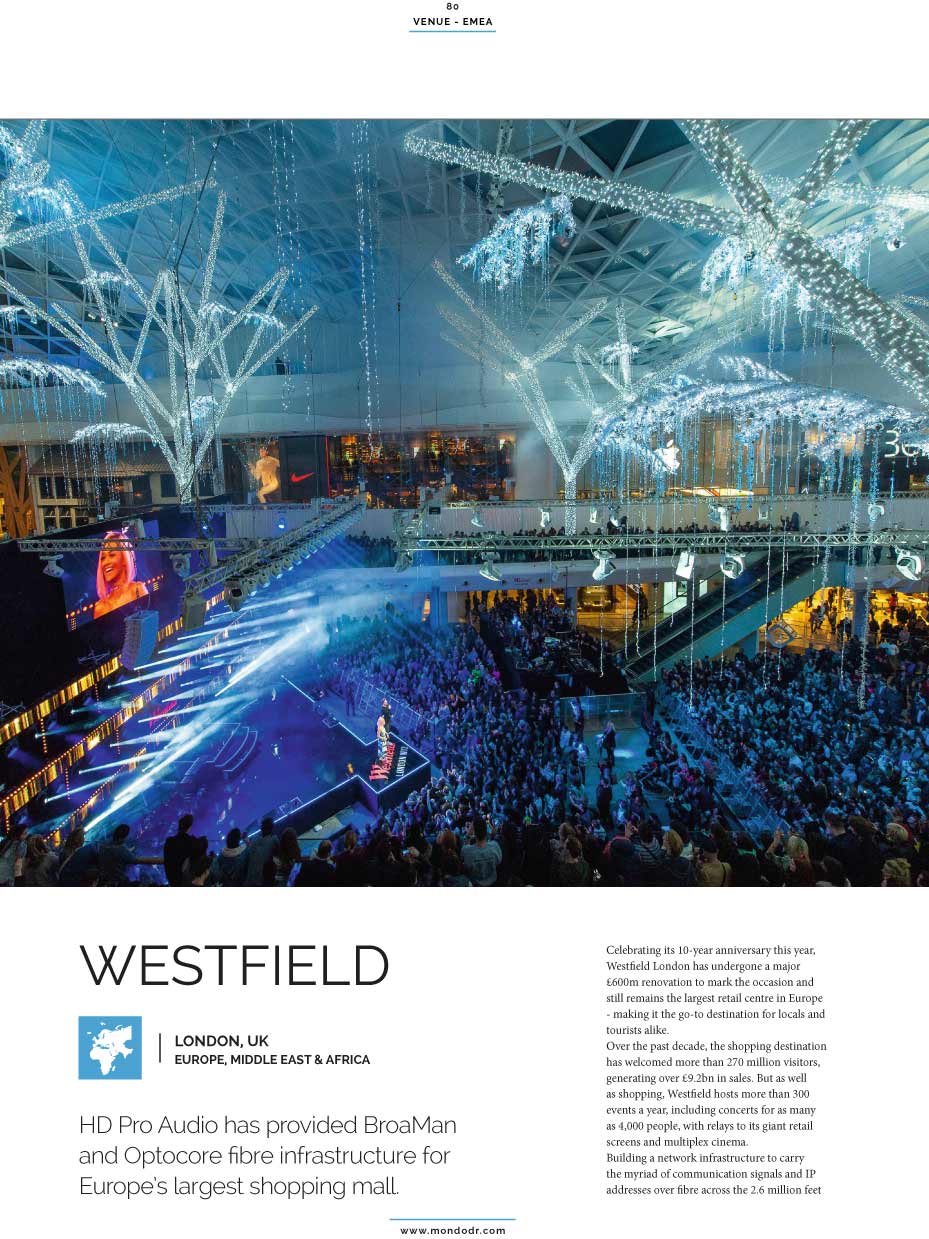 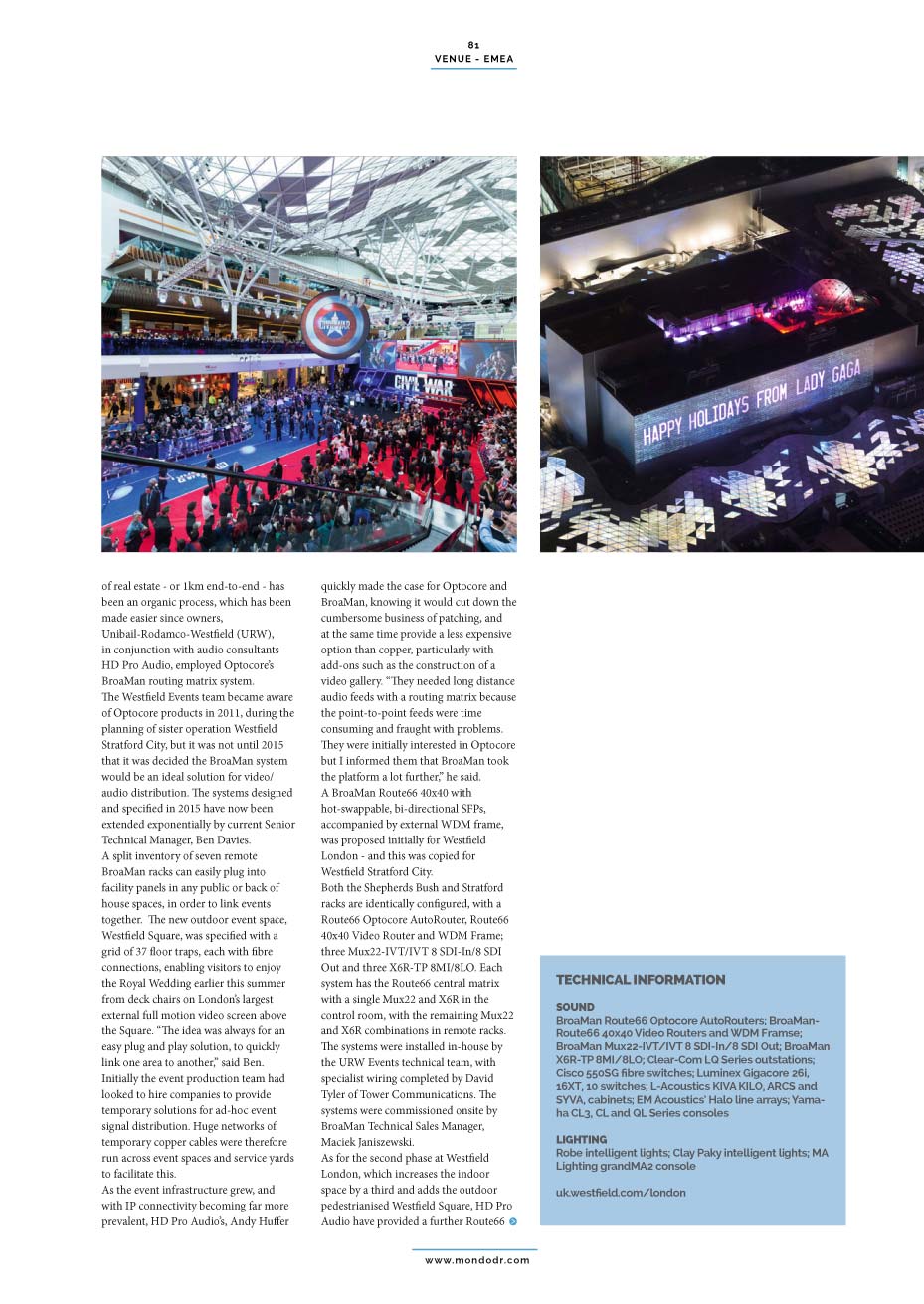 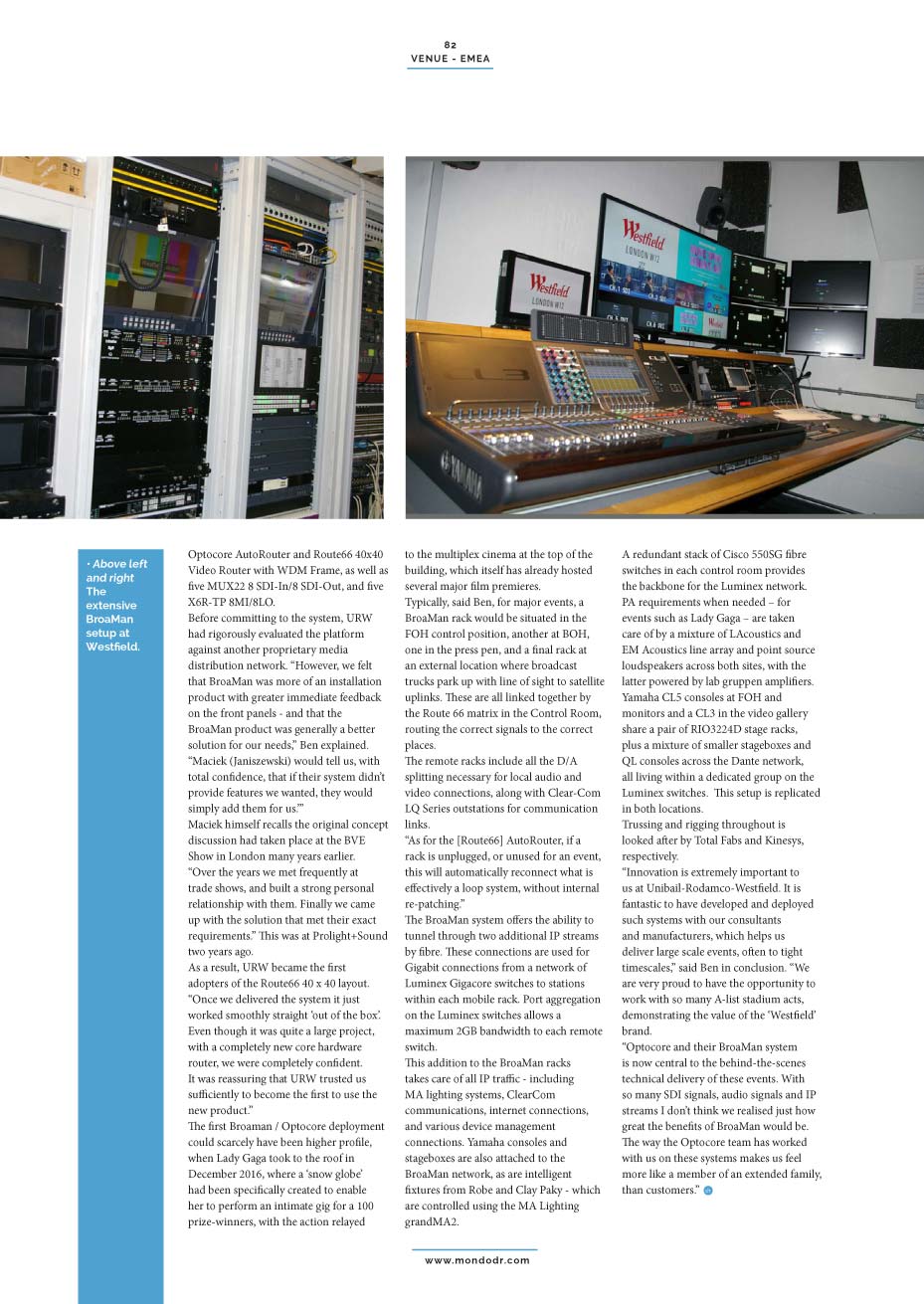